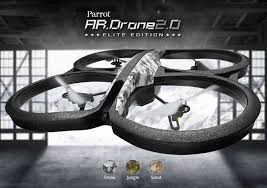 It must have been 2 or 3 weeks after my Mothers passing when I was contacted by SMAC (distributor of Parrot products in SA) to do a review on the Parrot A.R Drone 2.0 Elite Edition, I did not waste one second and replied, YES Please!

They had the product couriered to my offices where I received this big package all wrapped up. I was like a kid in a candy store, my eyes grew to the size of saucers and I began to lick my lips from salivating so much. It was at that point where a close friend popped into my office to say hello and saw the package and started to do the same.

We looked at each other, away and back at each other again before starting to rip open the package. As we were ripping away layer by layer the excitement grew stronger and stronger with girl-like screams bellowing from his mouth, I had to take a step back, breathe and tell him to stop acting like a school girl.

Once the package was finally unwrapped and the A.R Drone was sitting on the table I began to open the box and remove its contents. It was at that moment that I noticed we needed to download an application to either an Android or Apple device and well what do you know, I HAVE BOTH! So I used my Apple iPad and Samsung S4 and attempted to download both required applications which took some pretty time and my friend had to leave without getting a chance to play around. Once I finally had both applications setup and ready I started to pair the devices so that I could take this puppy for a spin.

As soon as everything was paired and ready to go I took the Drone outside, turned it on, the propellers turned on and the HD camera it has in the front and bottom turn on so you can watch the device instead of the Drone itself and I had the biggest grin on my face that it could have lit up the entire parking lot. I pressed the take-off button and viola it began to ascend higher and higher and even had a little speed wobble. As soon as I figured out that my up was down and my down was up a loud irritating beeping sound started and the A.R DRONE descended quicker than I could say

“Did I do that” and I realised that the battery was finished.

My head dropped as I did the walk of shame back to my office. I walked inside and grabbed the charger and took the battery out and was about to charge it when I thought to myself how long should I be charging this battery for?

I looked inside the box and saw no manual, in a little bit of a panic I quickly asked my good old and always trusted friend GOOGLE and in two blinks of an eyelid I had all the information I required.

The battery only needs 1.5hrs of charge and now it was already 5pm and I knew I would not have a chance to fly it today so I thought I’d charge it in the morning and go to a park and have a proper fly and that is exactly what I did.

I must say that I have not had this much Good Fun in ages and it made me feel like a kid again. Yes it does take some practice to be able to fly this Drone but boy oh boy when you get the hang of it, you can’t begin to fathom how much fun it is to fly, I mean I was sitting in my lounge and wanted to try fly it with the indoor Hull on which I did with ease and even flew it into my neighbour’s house from my lounge without having to leave my chair.

I definitely recommend this for anyone serious about starting a new hobby or who really enjoys these types of TOYS because in the end that is what it is.

“The difference between Men & Boys is the Price of their Toys”

So if you would like to purchase the A.R Drone 2.0 Elite Edition expect to pay anywhere in the region of R3999 – R5999 from The gadget shop, Incredible Connection, Dion Wired, SMAC They Sent A Special OnePlus